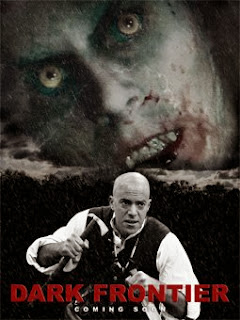 A movie entitled "Dark Frontier" is currently in pre-production.  Its producers don't seem to have a website, but they have been allowing glimpses of the filming via a devoted Facebook page.  They promised something special in time for Halloween, but it has yet to materialize.

The storyline, which is apparently in the midst of revisions, follows a group of frontier spies on the Braddock expedition who go out ahead of the troops "to do recon on the Indian threat." And then, judging by the poster, scary things start occurring.  This sounds promising.  And by promising I mean terrible.

Who knows, though?  It might make for a pleasantly worthwhile surprise after all.