Email ThisBlogThis!Share to TwitterShare to FacebookShare to Pinterest
Labels: Musées/Museums

Move over, wishful Le Griffon: a bona fide Cavelier de la Salle shipwreck is in the news!
﻿﻿
La Belle was part of the explorer's fleet as he sailed to the Gulf of Mexico on an ill-fated search for the mouth of the Mississippi in 1685.  The ship sank in Matagorda Bay the following year, and was famously rediscovered and diligently investigated by the Texas Historical Commission between 1995 and 1997.  An astounding 700,000 artefacts were recovered.  The bottom third of the wooden hull, having been well preserved by the mud on the sea floor, was painstakingly raised and over the last several years has been stabilized in a giant freeze drier on the Riverside Campus of Texas A&M University.

Reassemby of the ship was scheduled to begin in October of last year at the Bullock Texas State History Museum in Austin, but the stabilization process took somewhat longer than expected.  La Belle was in the news last week because some of its largest portions were finally loaded onto an eighteen-wheeler and transported from the Riverside Campus to the Bullock Museum.  Reassembly is set to begin this fall and should be completed around May of next year.  This October 25th, the museum will in fact launch a new exhibition, La Belle: The Ship That Changed History, which will feature the public reconstruction of the hull besides the usual artifacts, maps and pictures of the excavation and conservation.  A dramatic trailer?  Check: 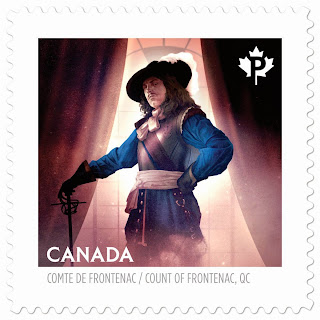 As fellow-blogger Joseph Gagné has just observed, Canada Post has launched a stamp and postage paid postcard in the image of Count Frontenac as part of its "Haunted Canada" series.  I am far less flegmatic than him, however, in reporting the news.  My misgivings are legion.

First, the portrait is as fanciful as it gets.  We do not know what Louis de Buade de Frontenac looked like, for no period portrait of him exists, but a little basic research would have allowed for a much more accurate image.  When he came to the colony he was no more the youngish to middle-aged man seemingly portrayed here: he was fifty years old when his first mandate began, and sixty-eight when he returned for a second one; he had reached the ripe old age of seventy-six when he died at Quebec in 1698.

Which brings me to the man's outfit, which is an imaginative "musketeerish" thing more reminescent of the middle of the seventeenth century than of its last decades.  The rapier, or sword, too is out of place.  I don't know how ghosts choose what to wear, but surely they are more discriminating than this!  By the way, this is not the first time I have to berate an institution for endowing its Faux-Frontenac with a grossely inaccurate costume and accessories: long-time readers may recall my rant on the Grévin wax museum in Montréal.  People!  Why won't you hire costume historians and historical artists?  I can give you a few names if you have trouble find any.

I am also very dissapointed with Canada Post's choice of this particular "Québécois haunting".  As accompanying blurb, they explain that the stamp depicts depicts "Quebec’s Chateau Frontenac hotel’s most famous otherworldly resident: the Count of Frontenac, for whom the hotel is named. The Count died in New France while his fiancée was in Europe. Legend tells us he had his heart sent to her, but she returned it, mortified by such a grisly final gesture. The Count is said to wander hotel halls in his 17th century garb. Quebecers, share the Count’s tale with friends around the globe."

What's this?  So the Count is interested in roaming the halls of his namesake hotel for eternity, even though said hotel was built only in 1893, and much of what exists today is the fruit of even later renovations and expansions?  And he's pining for his fiancée, even though history books tell us that he had been married to Anne de la Grange for fifty years at the time of his death, and that he had a very business-like relation with her and that court gossip went so far as to claim that they could not abide by each other.  What about the heart story then?  There is a kernel, a tiny one, of truth to it.  Frontenac did request in his will that his body be interred in the Recollet Church at Québec, but that his heart be removed and placed in a lead or silver receptacle, and sent to France.  Not to his wife, though, but to the chapel of Saint-Nicholas-des-Champs in Paris, where his uncle and sister had been interred.  There was nothing "grisly" to separating the heart from the body, so that the latter might be interred and the former deposited in a more symbolic resting place.  It was a common practice among the European elites.

I enjoy a good ghost story as much as the next guy, but here Canada Post has chosen to highlight a particularly mediocre one.  I have not been able to retrace the origin of this particular haunting story, but it strikes me as very "commercial", i.e. plausibly encouraged by the Château Frontenac staff as a way to lend the premise some authenticity and playfulness.  Every great hotel needs a ghost, right?  If any readers are aware of when this tale first started to circulate, I would be very grateful to know.  I wouldn't be surprised to learn that it only emerged in recent decades, and is very much a fruit of travel magazine and internet hack writing.

In publicizing this particularly mediocre story, Post Canada has erred.  All the more so in urging "Quebecers, share the Count’s tale with friends around the globe".  What's the matter, Canada Post, do you hate history?  Would La Corriveau not have been a more appropriate choice, with its far richer legend? Surely so!

Email ThisBlogThis!Share to TwitterShare to FacebookShare to Pinterest
Labels: Fantômes/Hauntings