I don't know if anyone else noticed this, but last month Toronto Star publisher John Cruickshank, in an opinion piece criticical of Prime Minister Steven Harper for his willingness to allow the sale of a portion of the country's telecommunications spectrum to the Americans, writes: "What is the Prime Minister trying to achieve with this degree of market manipulation not seen since Intendant Jean Talon ran New France for Louis XIV more than four centuries ago? He says he is trying to make the free market more effective."  What a dubious and bizarre comparison.

In a more expansive but equally provocative vein, Greg Kennedy published a piece entitled "Lessons from the past: 'So What is Government for Anyway?'" over at Active History.  In it Greg, who teaches at the Université de Moncton and has accordingly the great merit of being one of the very rare Anglos to teach French colonial history en français, muses about the difference between the role of government and the burden of taxation in the French colonial context and in our own day.  He does not take the current PM to task, but rather the system writ large.  His assessment is rather pessimistic:


Obviously, I am not arguing that we should return to this bloody and bloody-minded period of our history.  [...]  But Louis XIV’s answer to what government is for would have been very straightforward.  The sovereign (in this case, the king) was the protector and chief magistrate of the realm.  The sovereign defended the country from foreign invaders and preserved civil order.  The sovereign made laws that regulated trade, business, and industry.  The sovereign even protected the realm’s forests and waterways.  The sovereign ensured that everyone had access to justice.  And that was about it.  Local communities largely administered themselves and the inhabitants looked after each other.


How much have we really evolved since Louis XIV?  In getting rid of the bad of the Old Regime, what good things have we lost?  Today’s Canadian state has become so ponderous that it seems both to decide everything for us and to never be there when we need it.  A modern Canadian prime minister in a majority government enjoys legislative and executive power of which Louis XIV could only have dreamed.

As an historian of the early-modern period, I think we should re-evaluate what government is for because an illiterate peasant (at least, a male, Catholic, French one) at the height of Louis XIV’s absolutist regime enjoyed a lighter and more transparent tax regime, better access to justice, and more autonomy at the community level than Canadians today.  Because modern liberal democracy has made us helplessly, hopelessly, horribly free.  And as incapable as infants.


Oh, those were simpler times!  I don't know what to make of this -- and, judging by the lack of response on the usually comment-rich Active History, other readers have had the same difficulty.  Greg, surely you must be pulling our collective leg?  Sure, people back in the day were more self-reliant.  But if you really want to go down that radically critical road, it seems to me that we should seek our inspiration not among Acadian peasants, but rather in small-scale societies of hunter-gatherers like the Mbuti of the Congo : in a not so distant past, they had no government, or social differentiation for that matter, and no taxes.  Now, they were capable folks!

I'm reminded of Hobbes' famous passage on what he saw as the natural condition of mankind: "In such condition there is [...] no knowledge of the face of the earth, no account of time, no arts, no letters, no society, and which is worst of all, continual fear and danger of violent death, and the life of man, solitary, poor, nasty, brutish, and short."  One doesn't have to endorse all of Hobbes' oeuvre to see that there's something here.  I'll take a ponderous government over the limited possibilities of your Early Modern Acadians any day, thank you very much.  And, since jumping across centuries is the name of our game, I might as well pull Churchill into the mix: "Democracy is the worst form of government, except for all those other forms that have been tried from time to time."

Now if you'll excuse me, I think I'll go chop down a tree and shoot a deer to remind myself that I'm still somewhat more self-reliant than my infant child.  Somewhat.  I'll be sure to have an ambulance -- paid for by Greg's taxes, of course -- on standby in case I chop or shoot myself in the foot. 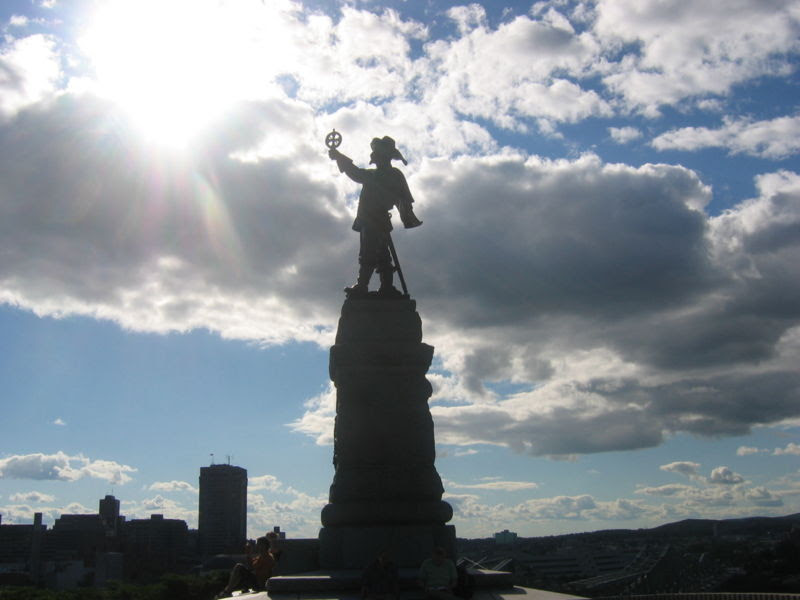 Some interesting material connected to James Wolfe and his family will be going on display next month at his childhood home in Westerham, England.  Objects on loan to the posthumously-named Quebec House from the related Warde family include the only portrait of him believed to have been painted in his lifetime, and a hand-written book of recipes by his mom Henrietta Wolfe.  It also included "his sword", which as of last year was being offered around by the Wardes to a select number of private buyers via one of big auction houses.  Notwithstanding the strength of the family's links to the general, this particular sword's provenance proves rather dubious.  I take this announcement that the piece will go on display until late 2015 as an indication that potential buyers didn't bite (and a complementary, even more cynical guess would be that the family is hoping to buff up its credentials before offfering it up once again).

Email ThisBlogThis!Share to TwitterShare to FacebookShare to Pinterest
Labels: Blogues/Blogs

I'm dying to get my hands on Joseph Boyden’s latest novel, The Orenda (Hamish Hamilton, September 2013; not to be confused with Kate Cameron's Orenda: A Novel of the Iroquois Nation published by Random House in 1991).  Were I more of a hipster, I might take this opportunity to proclaim that I've been into Boyden since before he was cool.  Don't get me wrong: Three Day Road (Penguin, 2008) deserved the universal acclaim it received, but Born With a Tooth (Cormorant Books, 2001) too was a delight -- dare I say that it already presaged greatness?  It doesn't have anything to do with New France, but read do read it if you enjoy good literature.

Boyden's latest book does have something to do with New France.  He turns from the twentieth century to the seventeeth, and explores the delicate and dramatic relations between Aboriginal peoples and Jesuit missionaries.  Here is the publishers' blurb :

The Orenda opens with a brutal massacre and the kidnapping of the young Iroquois Snow Falls, a spirited girl with a special gift. Her captor, Bird, is an elder and one of the Huron Nation’s great warriors and statesmen. It has been years since the murder of his family and yet they are never far from his mind. In Snow Falls, Bird recognizes the ghost of his lost daughter and sees the girl possesses powerful magic that will be useful to him on the troubled road ahead. Bird’s people have battled the Iroquois for as long as he can remember, but both tribes now face a new, more dangerous threat from afar.

Christophe, a charismatic Jesuit missionary, has found his calling amongst the Huron and devotes himself to learning and understanding their customs and language in order to lead them to Christ. An emissary from distant lands, he brings much more than his faith to the new world.

As these three souls dance each other through intricately woven acts of duplicity, small battles erupt into bigger wars and a nation emerges from worlds in flux.

In an interview with Maclean's, Boyden explains: “It seemed like the right time for a story I grew up immersed in”.  As a child he spent summers on Christian Island in Georgian Bay, where many Wendats (Hurons) fled in 1649, and attended Brébeuf College, named for one of the Jesuit martyrs. “Even if I did my best to get kicked out of that school—right down to a Mohawk haircut—I think my Jesuit education stuck.”

A Black Robe for the 21st century?  Whereas Brian Moore's 1985 novel andits 1991 film adaptation followed a Jesuit protagonist, the narrative voice in The Orenda deftly shifts from Bird the Wendat, to Snow Falls the Haudenosaunee (Iroquois), and Christophe the Jesuit.  In Boyden's version, by the way, the Jesuit is not a Black Robe, but a "Crow".
The Globe and Mail has a book review on Boyden's Orenda. 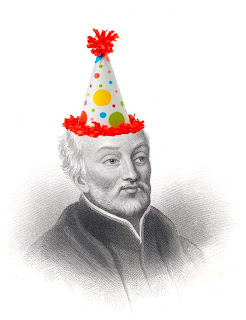 Following-up on the announcement by the Quebec government of a reform of the teaching of history, the Montreal Gazette's blog wonders Does history + values = votes for the PQ?, and, rhetorically, "what treatment would the fall of New France receive in the new history curricula proposed by the PQ?"

I must confess that I have a hard time keeping up with the news.  During the second week of August, the 17th annual Fêtes de la Nouvelle-France were celebrated in Quebec City.  Louis Bolduc Day was celebrated in Ste. Genevieve.  In Montréal, the Musée Pointe-à-Callière held its annual public market, 18th century-style (our friends from the Regiment de La Sarre were showing off their moves).

Last month the Ottawa Citizen ran a story on botanist Pehr Kalm's visit to New France, and the Minnesota news outlet MinnPost an biographical sketch of Louis Hennepin.  The StarPress, of Muncie, Indiana, meanwhile published some musings about the identity of the first white man to set foot in what would become Indiana: Marquette, Jolliett, La Salle?